By The Road Last Update: July 6th, 2022 To: Culture Comments 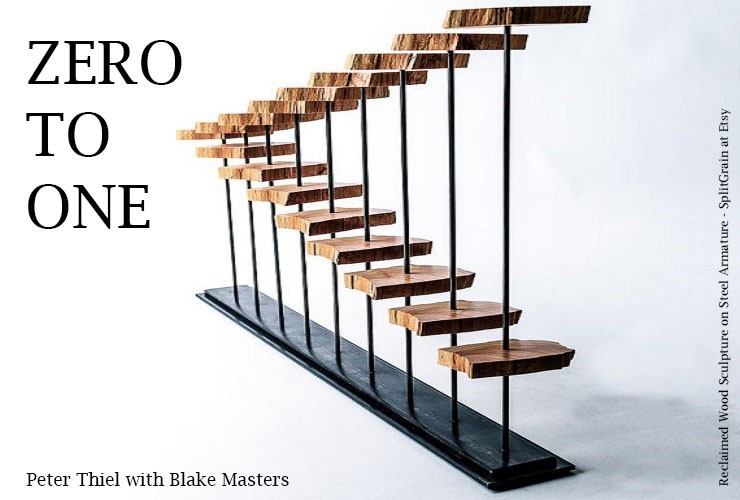 The book Zero to One was written by Peter Thiel, co-founder of PayPal and Palantir and investor in hundreds of start-ups, including Facebook and SpaceX, and Blake Masters, one of Thiel’s students. The book tells of entrepreneurial start-up and about building companies to create something singular and new. Yet, according to the book, there is no one formula, because every innovation is new and unique; the single most powerful pattern is that successful people find value in unexpected places.

"A startup is the largest endeavor over which you can have definite mastery. You can have agency not just over your own life, but over a small and important part of the world. It begins by rejecting the unjust tyranny of Chance. You are not a lottery ticket.”

The second part of the book is more concerned with tactics, giving valuable advice and perspectives about the right foundation for a start-up in terms of structure, team, funding, and product marketing.  The first half of the book, however, comprises many fascinating ideas about the creative and innovative aspects of the entrepreneurial journey. Some of these ideas are worth thinking about regardless of whether you are looking for entrepreneurial endeavor or not, just because we should occasionally find the energy and motivation to question the paradigms which have become dominant:

The School System – How well does education serve our creative spark and innovative thinking? "Most people think only in terms of what they’ve been taught; schooling itself aims to impart conventional wisdom,” says Thiel, challenging the role of exorbitant higher education which leads elite students to a level of competition sufficiently intense to beat their dreams out of them. Students who had big plans in high school get stuck in fierce rivalries with their equally smart peers over conventional careers. Why and for what?

Thinking Outside the Box – The more people are sensitive to social cues, the less open they are to doing things differently from everyone else. Pursuing ideas and activities single-mindedly is one way to excel at what you do and to minimize the likelihood that you will give up your own convictions and get caught up in the crowd, competing for the same obvious prizes. "The best projects are likely to be overlooked, not trumpeted by a crowd; the best problems to work on are often the ones nobody else even tries to solve.”

The Monopolies Idea – Starting with a big share of a small market can be the winning strategy for building and growing a company with a large cash flow reaching far into the future. The uniqueness of a monopoly is usually in its combination of characteristics of proprietary technology, network effects, economies of scale, and branding.

The Evolution Idea – In an ever-changing environment, Darwinian metaphors have become common in business. Even in engineering-driven Silicon Valley, the call is for building a "lean start-up” that can "adapt” and "evolve” into the unknown while at the same time listening to customers' needs making nothing more than a "minimum viable product” and iterating our way to success. But, in my opinion, the evolution of a product should also be observed from the innovator's point of view, as Thiel says himself, albeit in a different context: "An entrepreneur can't benefit from macro-scale insights unless his own plans begin at the micro-scale.”

The Power Low - The "Pareto principle,” or the 80-20 rule, is important for operating a company. The most important things are singular, and, therefore, one market will probably be better than all others, one distribution strategy usually dominates all others, some moments matter far more than others. "However, you can’t trust a world that denies the power law to accurately frame your decisions for you, so what’s most important is rarely obvious. It might even be secret. But in a power law world, you can’t afford not to think hard about where your actions will fall on the curve.”

Secrets - The concept that most caught my attention and stayed with me long after finishing the book was the chapter about secrets. "Every one of today's most famous and familiar ideas was once unknown and unsuspected.” Although there will always be more secrets to find, for many reasons—be it habit, comfort, or lack of belief—most people neglect the search, since secrets tend to yield only to relentless searches. Thiel suggests that there are two kinds of secrets: secrets of nature and secrets about people. The first require studying some undiscovered aspects of the physical world, while the second involve things that people don’t know about themselves or hide because they don’t want others to know. It was Thiel who fortuitously introduced me to the following quote from The Lord of the Rings, seemingly written in tandem with my own blog:

"Life is a long journey; the road marked out by the steps of previous travelers has no end in sight.”… And yet, "this road doesn’t have to be infinite after all. Take the hidden paths.”

I will conclude by just mentioning Thiel's note on viral marketing, something that seems an accepted truth these days: a product is viral if its core functionality encourages users to invite their friends to become users too. And I would add that this chain reaction of exponential growth created by users bringing more users not only lends strength to the product but also puts people at the core of the business. In a world of technology, robots, and machines, where questions about computers replacing human workers worries not only the luddites among us, this empowerment of people enforces the understanding that computers are complements for humans not substitutes and that people are far from becoming obsolete in the modern ecosystem.